Bullying is rampant in our schools. A 2013 study by Ipsos Reid shows that 59% of Canadians said they suffered abuse by bullies as a child or teenager and 45% believed they suffered lasting harm as a result. That’s half of Canada’s entire population affected by bullying. But, Big Sisters can play a pivotal role in turning that around. Girls with a Big Sister are four times less likely to bully than girls without a mentor. Plus, 92% of adults who had a mentor as a child feel confident and 96% say they’re happy.

Here’s the story of one of our Little Sisters who struggled with bullying before being matched with her Big Sister.

you don’t have the ability to tell yourself to ‘turn the other cheek,’ or ‘sticks and stones will break my bones, but words can never hurt me.’ So instead of staying strong, I felt sorry for myself and cried. I would love to tell you that during elementary school, or even high school, that the bullying stopped, but I’d be lying. I was in grade seven when the bullying hit its extreme. My mom saw changes in my attitude towards school, my way of looking at life, but worst of all, my respect towards my family.

My mom was struggling to help me, because I was telling her that I didn’t want or need any help, when I really did.

My mom was trying almost everything, but none of it worked. Almost everyone in my life knew something was wrong. My mom was talking to a friend about how life was getting harder for me, and they suggested Big Sisters to her.

When my mom brought it up to me, I was nervous and a little against it. I mean, it would mean I would HAVE to open up to someone as well as my mom. But at the same time it sounded like it would be different and fun, so I agreed to it. I had one condition though; my Big Sister had to have been bullied when she was in school, so she could relate to me. My mom agreed. After those few nerve-wracking weeks of waiting, I was matched to an amazing, open-minded lawyer who started to change my bad attitude just by sitting next to me.

Christina is a funny, always laughing woman, who seemed just as nervous as me when we first met. Even though I didn’t know her at all, I sensed that her flowing vibe could loosen mine. We were matched, but I didn’t know what to expect. After a little bit of time I opened up to her. 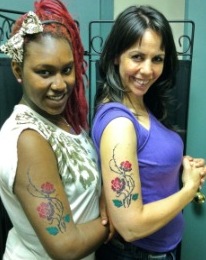 That was the moment Christina began to truly be my Big Sister.

We have been matched for just over two years, and we have a strong, great friendship. We have done lots of amazing and interesting things together, like some of the Big Sisters events we’ve attended. These include watching a Canucks hockey game in a ‘box,’ and going sailing. We also just hang out together and do stuff at her house, like playing board games, cooking awesome food (the sushi making was the best), and making a cool home-made video for my homework that’s been splashed all over YouTube. But even though all of this is fun and special, I would love doing absolutely anything with Christina as long as I had her company.

I’m more confident about myself than ever before, and my self-esteem is through the roof at times. And even though my life at school can still be rough and the bullying still continues, my attitude towards it has changed throughout these three years. Instead of feeling sorry for myself and thinking the world must hate me, Christina has shown me that putting a little more effort into the things that really count in life can conquer all the things and events that are trying to stop me from being who I am. And I believe being who you are is just a treasure in itself.

I believe all these positive reactions are inspired by the help and guidance of Christina.”