Study Buddy Anna and Little Sister Olimpia were matched for nearly four years, until Olimpia graduated out of the Study Buddy program. They were first matched when Olimpia was in grade 9 and as she describes it, a “rebellious teenager.”

“I dropped bombs on Anna, testing her to see if she would stick around,” Olimpia said about their first year as a match. Anna stuck it out with the help of her caseworker and the two of them developed a strong bond. Anna says,

“At the end of the day, Olimpia had self-perceptions that weren’t true,” said Anna. “Olimpia’s teachers and some of the other adults in her life were not supportive, viewing Olimpia as a problem kid on her way to dropping out of high school. But as I got to know her, she saw otherwise.” 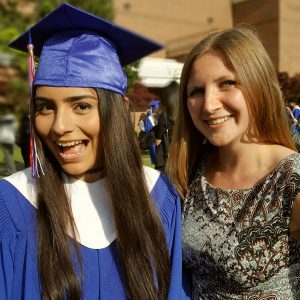 Olimpia is currently in her first year at Langara and is hoping to complete her degree in psychology or social work at UBC.

“Without Anna’s influence in my life, I probably wouldn’t be going to college,” said Olimpia.

Throughout their match, Anna – who works at UBC – would invite Olimpia to talks and conferences put on through UBC or other academic programs. Olimpia said that this exposure to the academic world was her favourite part of what came out of their match: “Anna makes me feel like I’m part of the smart world.”