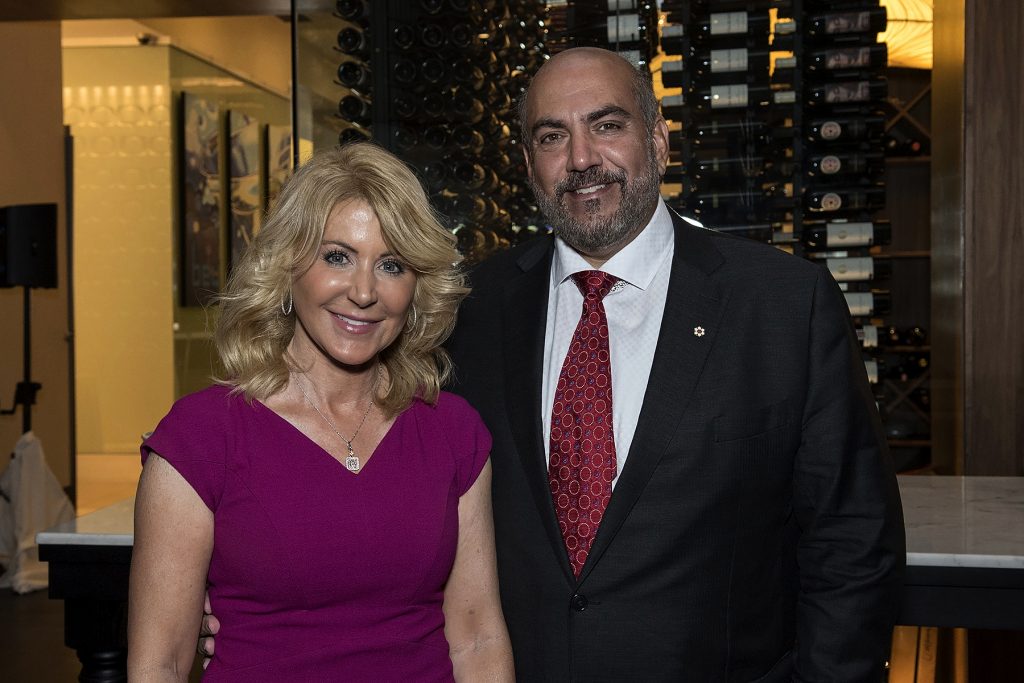 A healthy, diverse, equal society is nurtured through the everyday actions of courageous individuals. At the 2017 Luminary Award Soirée, we had the honour of introducing two of them as award recipients.

Luminaries stand out for their exceptional leadership that lights the way for others and makes a meaningful impact in our communities. We celebrate not only what they do, but also how they do it—building connections, mentoring others, creating meaningful change, and caring deeply for those around them.

It was our great pleasure to present the 2017 Luminary Award to Wendy Lisogar Cocchia and Sergio Cocchia.

Wendy and Sergio are exceptional people, whom we hold in the highest regard.  Many are familiar with the success of Wendy and Sergio’s businesses—Century Plaza Hotel & Spa, Absolute Spa, and Crew Group of Companies—a hotel, spa, comedy club, restaurant, recording studio, and property management company.

Wendy has a resume that would be profoundly intimidating were she not engaging in these feats with her signature persistence, commitment, and unapologetic determination to making the world a better place. She is the first female trustee on the Vancouver Police Department, a current fellow at Royal Roads University, and has served on the boards of Tourism Vancouver, Destination BC, and currently BCLC. Her Women’s Media Golf Classic has been raising millions of dollars for charities since 1987. And, not to mention her long list of accolades and awards including International Corporate Fundraiser of the Year & Angel Award, Sales and Marketing Executive of the Year, Leading Spas of Canada’s Lifetime Achievement Award, and Business in Vancouver’s Top 40 under 40—just to name a few.

Wendy’s achievements are inspiring to say the least, but this powerhouse marriage has two people and Sergio’s list of accomplishments shines as brightly, a credit to his community engagement and dedication to children’s causes. He served for 12 years as President of the Board of Directors of the Mediated Learning Academy and the Variety Learning Center, an independent school serving children with a variety of diagnosis and learning challenges. He received the B.C. Community Achievement Award in 2012; the “Doorman of the Year” from the C.H.I.L.D. Foundation, the Queen Elizabeth Diamond Jubilee Medal, and in 2013 was made a member of the Order of British Columbia.

If you can believe it, even in light of these accomplishments, Wendy and Sergio found time to parent two children and launch the Pacific Autism Family Network. After over a decade of hard work, collaboration, and fundraising, they opened the Pacific Autism Family Network’s main Hub last year. Bringing together existing services across the province all under one roof, to welcome and change the lives of families and individuals affected by Autism. It’s a one-stop shop for these families and offers not only services such as a preschool, music therapy, and programs, but also trains professionals including doctors, dentists, and the police to better understand and work with these individuals. The hub is truly innovative, one of a kind, and filled with families whose lives have and will continue to be immeasurably improved by the efforts of Wendy and Sergio, and the Pacific Autism Family Network.

In the months leading up to the gala, we had the distinct pleasure of speaking to Wendy and Sergio’s massive network of supporters, admirers, volunteers, and friends. They are so respected and loved in our community. Common threads emerged from these conversations —of their gratitude, respect, and admiration.

We now count ourselves among Wendy and Sergio’s countless admirers for similar reasons: their commitment to community organizing sets the standard for integrity, leadership, and achievement.